The home of the Rocky Mountain Pathfinder and Starfinder Societies! 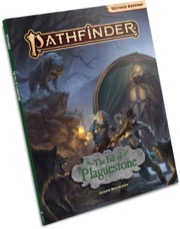 Fall of Plaguestone, Wednesday nights 6pm-10pm starting 8 Jan 2020, GM: Richard
A group of new adventurers traveling through the village of Etran's Folly—also known as Plaguestone—must come together to solve the murder of a friend. What starts as a simple investigation quickly turns sinister with the discovery of forbidden alchemy, mutant animals, and a nearby forest rotting away due to a mysterious blight. It becomes clear that if these heroes don't intervene to stop whatever evil is brewing, the fall of Plaguestone is all but certain!
The Fall of Plaguestone is the first standalone adventure for Pathfinder Second Edition, designed for 1st-level characters. It tells the story of how a group of strangers band together to form a group of adventurers while saving the town of Etran's Folly from a terrifying fate, serving as a perfect introduction to a new Pathfinder campaign!
Player 1: RC
Player 2: Roy
Player 3: Sean
Player 4: Jim
Player 5: Damon
Player 6: Tyler

From Richard: Fall of Plaguestone is officially sanctioned for PFS second edition play and I am looking to see if there is any interest in a playthrough. I originally wanted to run it at the charity event, but looking at it and reading some playthrough times on the web, I see it is akin to running one of the books in an AP – around 30 hours – so I don’t think it would get done at the charity event (and I can’t do overnight games anymore).

So, I am looking to see if there is any interest in playing it once a month on Wednesday nights.

That being said, I would like to run it. I have read through the new rules for running modules in PF2E and they have changed – to be more like running an AP in 1E.

You can build anything for a character – Core book, LOWG, LOCG, and the upcoming playtest characters – witch, oracle, swashbuckler, and investigator will all be legal for play. You do not need to make a PFS sanctioned character for this. Below are the rules as described in the chronicle sheet and rules page.


PATHFINDER ADVENTURES
Pathfinder Adventure: The Fall of Plaguestone can be played to gain specific benefits for the Pathfinder Society Organized Play campaign.

Pathfinder Adventures are generally larger with longer play times than scenarios and may take multiple sessions to complete. They do not contain specific faction-related elements, nor are they tiered for play by characters over a wide range of levels. Thematically, most modules do not assume the characters are Pathfinders. These adventures are therefor offered outside of the standard organized play environment and can be played with characters who do not conform to organized play requirements.

Modules can be of varying lengths, and each offer XP and other awards appropriate to their length and playtime. PCs can apply the Chronicle gained for playing Pathfinder Adventure: Fall of Plaguestone (included later in this document) to any of their legal organized play characters, granting that character 1 level’s worth of experience (12 XP), 12 Fame, 30 Treasure Bundles appropriate to a character of that level (applied in batches of 10 Treasure Bundles at each 4 XP interval), and 12 Reputation that can be assigned to any faction for which the character has the Faction Champion boon.

Chronicle sheets for adventures will occasionally include a section for “Keepsakes”. It is generally assumed that a character will only acquire one keepsake per adventure; once a player has applied this Chronicle to a character and purchased a keepsake from the list, they must cross the remaining items in that list off of their Chronicle sheet. This allows them to repurchase the chosen keepsake or even share access to it with other characters using inheritor boons or other options that allow a player to share boons between characters, but all other items cease to be available (though they may be available for acquisition later through the Achievement Point system.)

Players who complete this adventure, and GMs who run the adventure, gain the Chronicle sheet included with this document which they can apply to any of their Pathfinder Society organized play characters. Players must decide which character to apply credit to when they receive the Chronicle sheet and the GM signs it. Each Chronicle sheet gives 12 XP and access to some or all of the player options (such as items, feats, or spells) contained within the module.

I will also note that there are 2 feats – one a class feat, the other a general feat; as well as another interesting item that can only be gained from playing/running this module.

In addition to backgrounds from the Core rulebook, LOWG and LOCG here are 5 additional backgrounds that are pertinent to the Fall of Plaguestone story.


Lesser Scion
You are the youngest child in a noble house (in Cheliax, Isger, or Andoran) and stand to inherit nothing from your family. Although you have a minor title, it affords you no lands or wealth, but it has garnered you a small amount of respect and deference in your travels. When play begins, you are riding in a caravan bound for Almas, where a cousin has promised to allow you to stay with them for a month.
Choose two ability boosts. One must be to Dexterity or Intelligence, and one is a free ability boost.
You are trained in the Diplomacy skill and the Heraldry Lore skill. You gain the Hobnobber skill feat.

Lost and Alone
You were training to become a knight in Lastwall when the Whispering Tyrant escaped his imprisonment and destroyed the nation. It was only by dumb luck that you are alive at all, but the memories of that fateful day haunt your dreams. When play begins, you have boarded a caravan heading toward a new town, having worn out your welcome at the taverns and inns of Elidir.
Choose two ability boosts. One must be to Strength or Charisma, and one is a free ability boost.
You are trained in the Intimidate skill and the Warfare Lore skill. You gain the Intimidating Glare skill feat.

Missionary
You received training from clergy in a faraway temple, who sent you out into the world to spread the faith. Although you are relatively new at this, you are always on the lookout for new places in need of your deity’s teachings and guidance. When play begins, you are riding along in a caravan making your way through sparsely populated regions of Isger, spreading the news of your faith to those who will listen.
Choose two ability boosts. One must be to Constitution or Wisdom, and one is a free ability boost.
You are trained in the Diplomacy and Scribing Lore skills. You gain the Group Impression skill feat.

Refugee
The fighting around the Lake Encarthan region has forced many of the people residing there to flee from the violence. Although your home is gone, you have managed to survive and are making your way south in search of a better life. When play begins, you are riding along in a caravan taking you to what might be either a new home in Andoran or simply another waypoint in your journey.
Choose two ability boosts. One must be to Constitution or Intelligence, and one is a free ability boost.
You are trained in the Survival skill and the Hunting Lore skill. You gain the Forager skill feat.

Teamster
You left your home a few months back for a life on the road, working for one caravan company and then another, always on the lookout for a new job and a better life. Last week, you were hired by the Bort Bargith’s company in Elidir. You don’t know anyone from the company just yet, but most of its members seem to be honest merchants and traders.
Choose two ability boosts. One must be to Strength or Wisdom, and one is a free ability boost.
You are trained in the Nature skill and the Mercantile Lore skill. You gain the Train Animal skill feat.

Characters with one of these backgrounds unlocks additional side quests during the module.
Last edited by Sir.Gryphon on Thu Feb 06, 2020 4:54 pm, edited 11 times in total.
Pathfinder #47387
Venture Captain for Southern Colorado

What's this about?
Top

I'm in!
-RC
VA for Gamer's Haven/CO Springs
"If everyone is having fun, you're not doing it wrong."
Top

Sounds like fun. To bad I work Wednesdays.
Top

Looks neat, I'm in. If that's alright that is.

Hold up, so is this taking the place of Richard's Rise of the Runelords campaign, or being run in addition to it?
If it's in place of, I'd like to save a spot for Zaia and myself.
Top

I may have to alternate; as I said, it's an introductory module; which will allow people to use more of the options without having to buy ancestries and stuff with Achievement Points. You will level to 4 by the end of the adventure, but the character will not be usuable in PFS or any additional content - I think most will have build rules as in the book for higher level characters.
--Richard
PFS # 160719
GM stars:****
I too survived the Great Lemming Leap 2017 Thanks to $15 burgers. @ Judge Baldwins
Top

So here is the roster I see so far -

Ok, it appears we have enough to get this going. I do want the APG playtest material to be out as an option for you to make your characters. I'm not sure if I'm going to be in town for the Wednesday before Thanksgiving but maybe shoot for the 4th to kick this off?
--Richard
PFS # 160719
GM stars:****
I too survived the Great Lemming Leap 2017 Thanks to $15 burgers. @ Judge Baldwins
Top

Count me in, Richard.
Thank you.
Tyler
Top

For any of you that wish to try the APG playtest classes, I will allow them for play. Please see the following link.

Talking with Randy and having a very short December for gaming, we will look to start in January.
--Richard
PFS # 160719
GM stars:****
I too survived the Great Lemming Leap 2017 Thanks to $15 burgers. @ Judge Baldwins
Top
Post Reply
40 posts

This website uses trademarks and/or copyrights owned by Paizo Inc., which are used under Paizo's Community Use Policy. We are expressly prohibited from charging you to use or access this content. This website is not published, endorsed, or specifically approved by Paizo Inc. For more information about Paizo's Community Use Policy, please visit paizo.com/communityuse. For more information about Paizo Inc. and Paizo products, please visit paizo.com.
Powered by phpBB® Forum Software © phpBB Limited | SE Square Left by PhpBB3 BBCodes